This prize-winning, sustainable vehicle manufacturer reduced design changes from days to minutes with Solid Edge’s synchronous technology. The car designed with Solid Edge won the $5 million X Prize. Innovations and lessons learned with the concept car led to greater fuel efficiency in the production car. “Synchronous technology is helping us develop the Very Light Car in a very short timeframe,” said Brad Jaeger, director of research and development at Edison2.

The original Solid Edge designs that are now being modified were created using an order-based modelling approach. There is no problem importing these into Solid Edge with synchronous technology, according to Jaeger. “Solid Edge is designed to work with both ordered or synchronous features and allows the designer to use either as needed. As an added bonus synchronous technology can also edit imported models not matter what CAD system was used to create them,” he explains.

“We plan on using synchronous technology a lot in developing the next-generation car, and it’s really going to cut down on the time to production with our preproduction prototype.” – Brad Jaeger, Director of R & D. 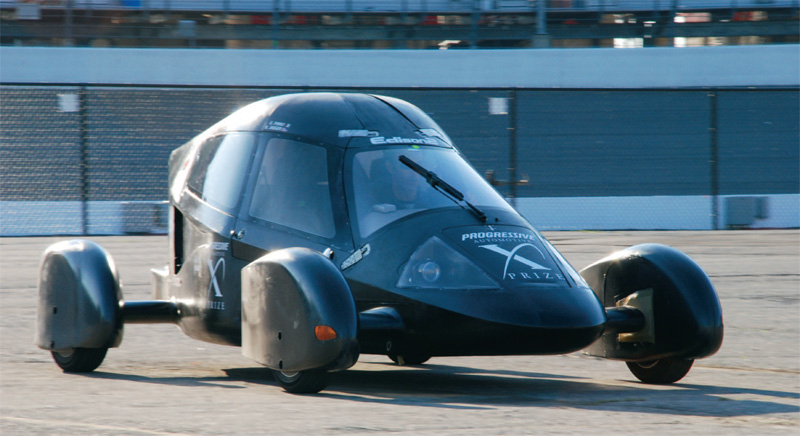 “We entered the competition expecting to build an electric or electric-hybrid vehicle,” says Brad Jaeger, director of R&D (research and development) at Edison2. “But our early analyses showed that instead of lugging around hundreds of pounds of batteries, a car would get better mileage if it were lightweight and had low aerodynamic drag.” That led Edison2 to choose a more conventional power source for its competition vehicle: a heavily modified Yamaha WR250 250cc single-cylinder, internal combustion engine.

Unlike some of the cars in the contest, which were modified versions of small production vehicles such as a Prius and a Smart Car, the Edison2 was designed from scratch. Every component was evaluated and redesigned when necessary with an eye toward simplicity, strength and low weight. For example, its brake callipers, which usually weigh several pounds, are less than one pound; lug nuts are 0.2 ounces instead of 1 ounce.

In terms of performance, the Edison2 was a huge success. It achieved the lowest coefficient of drag of any multi-passenger vehicle ever tested at the GM wind tunnel. At the Chelsea Proving Grounds, it had the best results ever recorded for a coast-down test, which is a way of looking at drag and includes rolling resistance.