There is no second place

Wind and water confront sailing prowess and design skill to make the America’s Cup the ultimate in thrilling and unpredictable sporting events. In the 35th event, Oracle Team USA will defend the title against one challenger on a circuit off Bermuda where the team will race in AC62 catamarans.

Presently five teams have set their sights on being that challenger and one of these is Ben Ainslie Racing (BAR), a collection of experienced sailors, designers and technicians who aim to bring home the America’s Cup trophy to the United Kingdom (UK) for the first time since 1851, when the trophy left the Isle of Wight.

They are led by Olympic medallist, Sir Ben Ainslie, who was on the US team that won the 34th America’s Cup. He describes the complexity of the task: “It’s a sporting challenge, it’s a technical challenge and it’s about bringing a large group of people together designing, building and then racing the fastest boat possible.”

In the middle of 2014, the BAR team began a two-and-a-half year timetable to design, evaluate and verify a 62-foot wing foiled catamaran. Crucially, teams are not allowed to launch their AC62 catamarans until 150 days before the first event of the 2017 America’s Cup Qualifiers. The bulk of design, analysis and performance testing must be completed on much smaller scale test models and on AC45 class catamarans, which are used for preliminary races during 2015 and 2016.

Each team must therefore have complete confidence in the boat when it is launched in January 2017. “The America’s Cup is a competition where you cannot afford to have an unreliable boat,” observes Andy Claughton, technical director at BAR. “We have to win five out of nine races; a mechanical failure would be a disaster.”

For Ben Ainslie Racing, the only choice was NX™ software and Teamcenter® software, an integrated virtual environment for digital modelling and simulation. Both NX and Teamcenter are from Siemens PLM Software and offer comprehensive capabilities for managing the product lifecycle. Software implementation, training and support services are being provided by Siemens PLM Platinum Partner Majenta PLM.

A race against time

An understanding of computational fluid dynamics (CFD) is critical to the design process. In order to achieve the best hull design, the team needs to generate and assess numerous shapes quickly and consistently. “The ability within the NX system to use scripts and produce hundreds of CFD geometries at the press of a button is immensely powerful,” says Claughton. “Processing geometry used to take hours, now it takes about 20 seconds; this is a good example of the strength of NX.”

Simon Schofield, a designer at BAR, points out, “The one thing we cannot buy is time, and NX enables us to make the best use of available time. The scripting capabilities of NX allow us to automate geometry creation giving us the ability overnight to produce thousands of geometrical variations, which can then be utilized as part of the optimization process. We would never use some of these shapes, but by exploring all possibilities, we know we are not missing anything, and we can focus design time on the best options.”

NX facilitates interaction between the sailing and engineering teams. Experience in the first test boat allows sailors to think about where they want items such as controls and foot chocks in the second test boat, due to be launched in the middle of 2015. The design team can respond to these requests in 3D immediately.

Claughton notes that NX is an essential tool: “We can achieve exactly what we want with NX; for example, if you are going to use a CAD (computer-aided design) file for machining, surfaces have to be accurate and NX is reliable. We know that when a surface looks right it is right. The software is also intuitive and user friendly. I can model something using NX, put it down and six weeks later pick it up again with ease.”

Schofield adds: “Being able to capture our thoughts in a parametric 3D environment is very useful, particularly when designers want to quickly describe a conceptual shape as a space claim and revisit it later in the design process. We can then change and optimize the initial concept to the final geometry with minimal re-work, which we do quite frequently. We can also work with other specialist applications such as sail design software and use IGES files to bring accurate data into NX with ease. In addition, the ability to make late design changes to a component and see all the amendments filter through the assembly is going to be extremely useful in the future, when we have to scale up designs.

Analysing the dynamic balance between stability and speed

“We could give the sailing team a solution that might be blindingly fast but impossible to sail,” comments Claughton. “Our job is to build the sailors a fast boat in which they have confidence. If they don’t have confidence, they won’t be able to go for a maneuver that could win the race.”

Designers need to analyze every part upfront in order to maximize both performance and reliability. Schofield explains the critical role of NX: “The embedded FEA solvers allow us to integrate our stress analysis, through the combination of FEA capabilities and scripting abilities. We can automate analysis loops combining finite element analysis, pre-loading condition and geometry iterations, and this really speeds up the whole analysis process. Within a minute we can, for example, iterate load cases to find a balanced solution, with no need for any manual setup or adjustment. When we need specialist pre-and postprocessing capability, we can easily turn to Femap for additional functionality.”

Results are delivered via a spreadsheet, with links to Teamcenter. Claughton adds: “The ability to generate huge volumes of data and conduct structural simulation before the design or dimensions are confirmed is really condensing time frames.”

Putting together finite element analysis (FEA) results with data captured from sensors located on the test boat gives designers a complete picture and the confidence to make decisions, balancing safety factors with performance potential. According to Schofield, this provides clear options for spending the available weight budget and distributing it optimally across the boat.

The rules of the America’s Cup are comprehensive and exacting. For example, BAR has to provide the history of every part, submitting documents to the Rules Committee to show materials used, identify material batches and describe manufacturing processes. Traditionally, this was all done manually and involved huge amounts of paperwork.

Teamcenter now provides a digital solution, assisting BAR not only in meeting all the rules of the competition but also in demonstrating compliance through an audit trail that verifies every aspect of design. Claughton notes, “It’s really important that, when you go out to race, you’ve got a boat that’s in class. If you win but can’t produce certificates of compliance for the components, you could forfeit the race.”

BAR is using Teamcenter to achieve control of the whole development process, from CAD through simulation and issue of drawings, to manufacture and installation. The aim is to build a complete and up-to-date design profile – a fully serialized boat with all components linked to a service schedule that shows how long they have been in use and how well they have performed.

This will provide additional agility during the competitive stages. If any rudders or boards are replaced the night before a race, the team will be able to submit all the relevant details to the Rules Committee.

The long-term aim is to have Teamcenter available on laptops, tablets and phones so that shore support and shop floor staff can enter queries and data as they track test performance or manufacture a part. The intention is to readily keep track of the sailing configuration and know which parts have been taken out, making maintenance easier for the shore crew.

Dr. Susie Tomson, BAR’s sustainability manager, explains that the NX and Teamcenter solutions are also helping the team meet its environmental goals. “The Siemens PLM Software solution allows us to work with our suppliers and boat builders and reduce waste by making the development process as efficient as possible. By understanding exactly what has gone into the boat, we can also work out what to do with all the components at the end, re-using and recycling in order to drive down the carbon footprint of the boat. That is one of our key objectives.”

Tools that can be trusted

“NX is the number-one choice for us; as the primary design and engineering tool for the team, we are 100 percent confident in it,” says Schofield.

“We’ve been very impressed with the support we’ve had from Siemens PLM Software because we’re pushing the limits of the NX system.” Andy Claughton (Technical Director)

“To win the America’s Cup with a British team, to bring the America’s Cup home for the first time in its history would be the most amazing experience and for sure a career highlight,” concludes Ainslie. “The Siemens PLM Software systems really enable us to collate our ideas and make sure they are put into practice. That’s why we wanted to partner with Siemens PLM Software, and we’ve been extremely impressed with the progress we’ve made so far.” 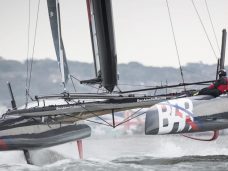 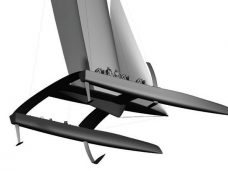 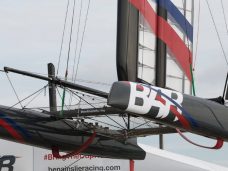 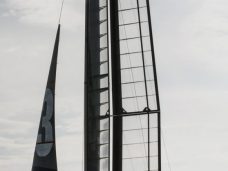 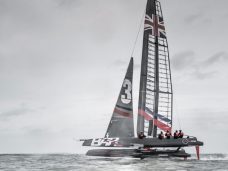