To satisfy the rising demand for industrial robots, several well-known international companies now compete to develop and provide industrial robots that can automate such repetitive manufacturing tasks as riveting, welding, paint spraying and handling components and sub-assemblies as they progress down the production line.

While this multiplicity of robot suppliers brings benefits to manufacturing companies in terms of the range of robots available to them, it does also bring with it a problem. That problem stems from the fact that robots from different robot manufacturers – and even different models within the same manufacturer’s range – will have different capabilities in terms of their speed, acceleration, deceleration and operating envelope etc. This means that the cycle time to perform a specific move varies between different versions of the same type of robot, which results in different overall cycle times for completing a specific process as defined by the customer’s process engineers.

Furthermore, although individual robot manufacturers do provide their own robot control software (RCS) modules for their individual models and while many can also simulate the moves that their robots will perform, these simulations only show the robot operating in isolation. They do not take account of the surrounding environment in which they will be operating in the real world. Obviously, this could lead to serious problems on the shop-floor.

That’s where manufacturing automation specialist Autotech and its use of Siemens’ Tecnomatix software comes into the picture.

Autotech designs, installs, maintains and upgrades electronic control systems that enable its customers in a diverse range of industry sectors, including the automotive and other manufacturing industries, logistics, airports and the food and beverage sector, to keep their production and distribution systems working efficiently.

In the automotive industry, for example, Autotech is the leading control systems supplier to the European market. It has delivered solutions for all the major automotive OEMs with operations in Europe, as well as for many of these OEMs’ Tier 1 and Tier 2 suppliers, both in the UK and in continental Europe, helping them to meet their JIT line-side deliveries.

For some time now, Autotech has been using Siemens’ Tecnomatix Robcad software to simulate robotic manufacturing work-cells in order to prove the solutions it develops fully before these are delivered and installed on site. More recently, Majenta PLM, the leading UK Siemens PLM Software Solution Provider, has also supplied and helped Autotech to implement the Windows-based Tecnomatix Process Simulate software that replaces Robcad.

Tecnomatix enables programs for multi-device robotic production processes, including spot and arc welding; laser, water-jet and plasma cutting; drilling and riveting; painting, sealing and gluing; and polishing, grinding and deburring, to be simulated and validated before being installed on the shop-floor.

“With the Tecnomatix software we are able to simulate and prove fully the functionality of robot cells before they are installed on the customer’s shop-floor,” explains Ian Farmer, technical director for Autotech. “This reduces commissioning time, because there are far fewer issues to deal with during installation. It also gives our PLC (programmable logic controller) and robot programmers access to the virtual cells prior to installation, helping to ensure the generation of high quality, right-first-time control software, which again saves time, enabling the customer to get into full production sooner.”

For Autotech to develop, simulate and deliver robot programs that meet precisely the customer’s requirements demands a great deal of collaboration. The development process can involve anything up to eight to ten different parties, from the OEM, such as Jaguar Land Rover, through the Tier 1 suppliers, like VDL Steelworld, FFT EDAG, ABB UK and Laepple, to the robot manufacturers themselves such as ABB, Comau, Denso, Fanuc, Hitachi, Kawasaki, Kuka, Yamaha and many others.

Each of these parties contributes part of the final picture. Engineers at Jaguar Land Rover, for example, will design the layout of the production line required for a new vehicle. Their Tier 1 suppliers then complete the actual process flow, determining how many of each robot and what additional equipment and fixtures etc will be required to build the actual line, which could comprise anything up to 10 to 15 robot cells each with two, three or four robots of one kind or another.

In theory, the Tier 1 supplier could then use the appropriate RCS modules from the robot suppliers to program the robots’ actions and things could stop there. In practice there’s more to it than that.

So the next step is the crucial one. It’s the step that will determine whether or not the individual cells and the production line overall will perform as required. And it’s where Autotech and its use of Tecnomatix take over in the development process.

Because Tecnomatix is a generic robot program and simulation development platform, Autotech is able to use it to develop and simulate 60-70% of the robot program without needing to worry about the performance differences between specific robot models. These differences can be dealt with later.

Farmer outlines the process that he and his colleagues at Autotech go through.

“Using the Tecnomatix software, our role is to develop and prove a robot program for each robot that is required for each process and that is sequenced with all other robots around and within the zone or cell in order to complete an operation within the contracted cycle time. It must also be collision-free with other robots and with the fixtures and other equipment, such as guard rails, conveyors and overhead trunking, that is within each robot’s surrounding environment,” he states.

“We therefore need to have access to data from multiple sources in order to build a virtual environment within Tecnomatix that will enable us to complete our task,” he explains. “This data includes 3D CAD models of the parts that are to be manufactured and assembled, models of the robots themselves, information on other equipment, such as conveyors, fixturing and other equipment within a cell and tooling information. In the case of Jaguar Land Rover, for example, we usually receive a CAD model of a complete robot cell that has been developed by them and their Tier 1 supplier.”

3D CAD models are made available either in a neutral format, such as JT, or via a direct translator or, in the case of 2D layouts, as DWG files. This data is combined within Tecnomatix to create an accurate 3D model of a complete robot cell that includes all of the equipment, both static and moving, that it will comprise.

“Without this accurate 3D virtual model of the cell, we wouldn’t be able to simulate the real-world operating environment,” states Farmer.

Working from the information provided by the customer, such as the number and positioning of rivets or welds required on a specific part, Autotech then uses Tecnomatix to develop a program that will drive a robot along a path that takes it to the correct points on the part, in the correct order, while missing any fixtures.

As Farmer explains, “What we’re using Tecnomatix for at this stage of the development process is to produce generic robot programs that drive the robots to perform a process specified by the customer’s process engineers.”

This process could be something such as: 1) parts loaded, 2) turntable turns, 3) clamps close, 4) robot rivets, 5) turntable turns, 6) parts unloaded, 7) turntable turns back. Start process again. All these moves can be programmed and then simulated using Tecnomatix. However, the cycle time to complete the process will be a ‘generic’ cycle time that at this stage won’t accurately reflect the capabilities of the specific robots within each cell.

The next step for Autotech’s robot programmers, therefore, is to integrate the robot manufacturers’ RCS modules for the specific robot models within each cell into their generic Tecnomatix program. By customising the Tecnomatix program in this way, Autotech is able to generate a complete robot control program that drives the different models of robot within a cell or zone to complete a process in the most efficient way and which meets the process engineers’ specifications in terms of process sequencing and cycle times.

The completed program can then be simulated graphically and proved in Tecnomatix using the 3D model of the full robot cell developed earlier and including the parts that are to be manufactured and assembled on the line.

Farmer lists several very real benefits to both Autotech and more importantly, to its customers that the use of the Tecnomatix off-line programming and robot cell simulation facilities brings.

Among these are a reduction in the time it takes to develop a complete robot cell program and to get on site at the customer, together with a minimum of on-site failures, collisions and damage to production line equipment during the installation and commissioning process.

“Tecnomatix enables us to develop a complete 3D virtual environment of a robot cell which we can then use to simulate our programs off-line. Previously it was only possible to check robot programs live, on-site – and run the risk of causing damage,” states Farmer.

Another benefit he lists is that all programming is done off-line at Autotech’s offices – not on the customer’s site. This means that the customer is able to continue as before until the new software is ready for installation, resulting in less production line down-time. This also enables Autotech’s customers to readily accommodate revised, new or alternative models on an existing production line, with robots being reprogrammed and the programs verified off-line by Autotech using Tecnomatix.

He also cites the important role that Majenta PLM plays as the robot programming and simulation solution provider.

“Majenta PLM’s support in terms of the initial software implementation and subsequent upgrades, end-user training and on-going technical support are essential to the level of service that we are able to offer our customers today,” he states.

Summing up, Farmer says, “Without Siemens’ Tecnomatix software we could only simulate a robot’s movements in isolation. We wouldn’t be able to simulate their movements within a robot cell and their interaction with other equipment within the cell and its environment. It provides us with a powerful robot program development environment within which we can also prove our programs off-line before the software is installed on the customer’s site. Not only does this save time, it also enables right-first-time robot programs that precisely meet our customers’ requirements.” 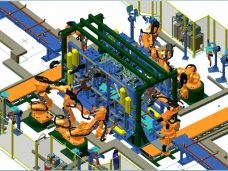 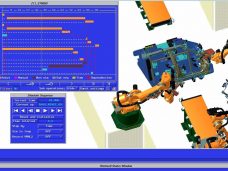 What our customers say

Got a question? Get in touch